In this game there are markers called 'picostops' scattered throughout the map which drop random items whenever you have defeated a few wild monsters. 'Picostops' also replenish and revive all the monsters in your party. Catch new monsters with picoballs.

Due to the save restrictions of pico8 the team size in this is only 4. Every wild monsters can have up to 4 different moves it's recommended to catch and compare to build your best team. There is also a very small story about professor corks whereabouts...

Let me know if you run into any issues. Thanks for checking it out :)

arrow keys: move around
x: open menu to view monsters, items and save
z: interact with people and things

Each monster is associated with an element and some elements have advantages over others.

I just played for a few minutes. The music in the background could use some help. The main drum beat gets a bit annoying. Maybe make it quieter or break it up a bit.

It's an interesting spin off. :)

Leer doesn't seem to actually do anything to make a monster's defense worse, it seems like the monster takes  the same amount of damage no matter how many times I use it as if Leer isn't working properly.

Also, the HP gauge can be visibly completely empty for a monster when it isn't at zero HP.  A strange design choice or maybe a bug?

Do you intend to expand upon this game? Make it a little longer perhaps? I quickly ran out of unique things to do in less than 5 hours.

Sorry to say, I am on the pico-8 token limit already, so almost no room for more content. But I will try to keep it updated.

Happened to me on the city/path tile.

Why does it say "THE ALL YOUR MONSTERS ARE HEALED..." when you go to the Pico stop? Shouldn't there be no "the" in the sentence?

Thank you for your comment! It should now be fixed.

The game is glitched and sometimes randomly forces me into a random encounter without moving into grass. Fix it please.

Encounter tiles are: water tiles, cave tiles and grass tiles. Did this happen on any other tile?

Yes, it started to randomly do it on more than just cave, grass, and water tiles, it started doing it on road tiles and other tiles that aren't supposed to actually cause monsters to appear. Also monsters appeared randomly during monster battles as well, which interrupts the previous battle and just doesn't make sense. Can you detect and  fix the issue?

does this game end after you get the hammer?

nice game!, what do u use to create this game? any coding is needed?

Thanks! I used Pico-8 to make this: http://pico8.com/ It uses Lua for the scripting/coding.

I encountered the most bizarre glitch. When I was in the cave, I encountered a normal picomon, then its sprite flashed, then it became a different picomon. Then after deafeating the new one, it became a second. This happened 2 times, but after the 2nd, I somehow warped to the beginning. It was pretty wierd...

Tried to fix that glitch in the latest version. Thank you for pointing that out!

Lovely game! I never grew up playing Pokemon, but this is just such a joy to play.

1. Smokeballs for some reason don't get 'used' so if you even have one you have an infinite amount.

2. After getting the apple and going over to the guy who wants the apple, along the way my game glitched and every few steps (on any tile) it would glitch into a battle.

EDIT: I believe this was cuased by me not actually clearing my inventory. I thought I was down to 10, but I wasn't, so it glitched out.

Also, is there no way to restart to a new game?

PS. Do you plan on expanding this game?

Thank you for the kind words, Chris! I will fix the issues in the next version.

I don't think I will expand on this a lot in the future but I have ideas for a few minor upgrades(trainers, endgame goal...). I am also at the limit of Pico-8 tokens so I can not add too much more.

I can't seem to find wild monsters in the grass, what am I doing wrong? ;w;

try again, it should work now :)

you should prevent to release if only have one picomon, i release swoopy the moment i found the feature and the game crash xD

Thanks for playing and the feedback! Wow, you are totally right. I fixed that in the latest version. 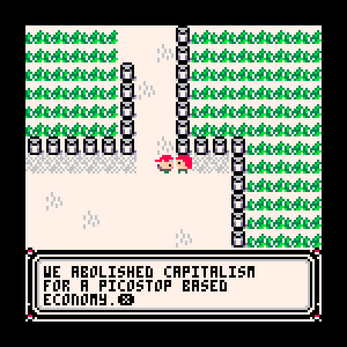